Veneer can be produced in its purest form – a thinly sliced log – or other processes can be applied to further expand the final outcome. For example woods can be dyed to produce more extensive colour options (retoned) or produced from a mix of logs (reconstructed) rather than a single log (natural).

Natural veneer, as the name suggests is 100% natural and nothing artificial is incorporated. It’s pure, sliced timber.

Natural timber veneer is cut from selected logs prepared for production according to the desired appearance, which depends on the feature and structure of the grain. Natural veneer reflects the species of timber and log from which it comes. It delivers a wide range of natural variation creating a significant selection within a single species.

In Australia there are over 100 varieties and
species of veneers, both indigenous and imported.

Light coloured woods are dyed to produce artificially coloured veneers. The veneer is pressure-treated for maximum penetration of the colour into each veneer. Woods that lend themselves to this process include Tasmanian Oak, Sycamore, Anegre, Birdseye Maple, Tulipwood, and Koto.

Advantages of retoned veneers include:

Reconstructed veneers are manufactured from readily available timbers such as Poplar, Obeche or Bamboo, which are normally plantation grown.

The logs are rotary peeled into veneers, which are then dyed all the way through, and dried. Layers of variously coloured veneers are then laminated together in moulds in a controlled pattern to form ‘grain’ patterns that are then re-sliced into veneers.

The way the layers of the veneers are arranged and then are sliced depends on the desired pattern. The process is fully automated and often involves the use of computer software to produce different veneer figures and pattern.

The advantages of reconstructed veneer are:

Reconstructed natural veneers are made by laminating the component raw veneers together into a block, then slicing this block across its laminated face to produce decorative grade veneers.

Careful mixing of these component veneers during the laminating process ensures that the reconstructed natural veneer is usually consistent in grain and colour for hundreds of sheets. But there will be some colour and grain variation between blocks, although less than the variations in natural veneers.

Pre-finished veneers are veneers supplied in a laminate type form ready for use. The veneer may be plain natural veneer, stained or limed natural veneer, reconstructed or dyed veneer.

The veneer face may be sanded smooth or have an enhanced grain texture created by sand-blasting or wire-brushing. The face is finished with a clear coating, such as melamine film, UV cured coatings, cross-linked acrylics or a 2-pack polyurethane.

The type of finish used will determine the degree of scratch resistance, likelihood of yellowing and fading (which is also influenced by the veneer type) and moisture-resistance.

The finishing processes occur under strict quality control in a factory environment giving consistency across projects, which is difficult for normal cabinetmakers to achieve. It also means there is no need for polishing at the fabrication stage, which delivers a major cost saving.

A pre-finished veneer lets specifiers understand the texture and nuances of the timber finish they wish to specify and see the final product beforehand fabrication. This equates to savings in time, risk and money, plus confidence about how the final product is going to appear.

Other advantages of pre-finished veneers include:

Veneer Edging is available in strips or continuous rolls to apply to the edges to match the veneered product. Laminated Veneer Edging (LVE) is produced by laminating veneer together, and is used as a substitute for solid timber.

Curved Plywood is layers of timber veneer bonded together and moulded by pressure into a variety of shapes.

A range of timber veneered profiles can be produced through the profile wrapping process of a timber or MDF shaped substrate. This enables manufacturers to complement panel products with matching veneer wrapped profiles.

Inlays either plain or patterns.

Read on about the different ways to cut veneer 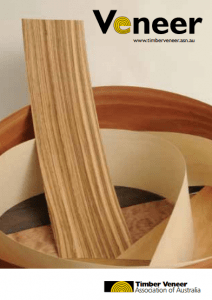